This is the Estonian government record of my grandfather enlisting in the Baltic Regiment on January 10th 1919.  He is record #48 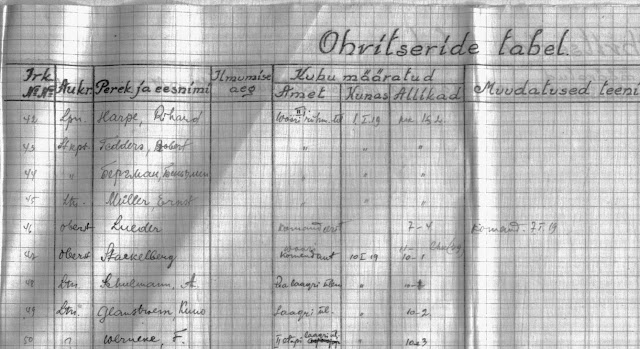 The Baltic Regiment (Baltenregiment) was a Baltic German unit created to fight on the side of the Estonian government in the Estonian war of independence against the Soviet Union.

Historical Background and the Beginnings of the Baltenregiment
In the course of the Great War, Germany captured the Baltic Provinces of Russia with the intention to separate them from the Tsar's empire. After Germany had lost the war at the western front, the Bolsheviks decided to export revolution to neighboring countries. The Bolsheviks invaded Estonia, among other countries.
Since the Bolsheviks posed a serious threat to Estonia, its prime minister, Konstantin Päts (1874–1956), decided to negotiate with the Germans. The result was that Baltic-Germans were allowed to form their own companies commanded by Baltic-German officers; the Estonian government would help to equip them. In early November 1918, the Baltic-Germans tried to create an international “Landeswehr” (territorial army) in Tartu, which the Estonian authorities opposed. On 20 November 1918 the Germans from Viljandi County founded their own military forces with Victor von zur Mühlen (1879–1950) as their commander.
Baltenregiment in Estonian War of IndependenceOn 27 November 1918 the Germans in Tartu formed their own military forces, which eventually became the “Baltenregiment” (Baltic Regiment). Only a day later the “Dorpat-Heimat-Schutz” (“Dorpat Homeland Security”) was formed. Both activities were initiated by corps students from the local university, mostly sons of Baltic-German nobility. The Balten-Battalion, formed by the Germans living in Estonia, participated in hostilities on the Narva front in 1918. In January 1919 the main Estonian forces consisted of 2,500 Estonians and 300 Baltic-Germans. Considering that the Germans only made up 1.8 percent of the Estonian population, they were clearly over-represented in these forces.
At the beginning of 1919 the Balten-Battalion merged with units under Victor von zur Mühlen’s command and reorganized into the Baltenregiment. Constantin von Weiß (1877–1959), a former colonel of the Russian Army, was appointed commander of the newly established military formation.
The Baltic unit was send to the Lake Peipus region, where it captured the city of Gdow. Later the unit was transferred into the Volosovo region to support the White Russian Northern Corps. In August the Baltenregiment fought on the Luga river as a part of the 1st Estonian Division. In October it took part in the offensive on the Whites in St. Petersburg. Despite their initial successes, counter-revolutionary forces were eventually beaten back. In November the Baltenregiment again saw action on the Luga line. Soon, a ceasefire ended the hostilities; on 2 February 1920, a peace treaty was signed in Tartu.
Importance of the BaltenregimentAt the end of 1918 the ´ consisted of 1,000 soldiers, mostly Germans from Estonia. They were organized into four infantry companies, one machine gun company, one artillery battery, and one cavalry squadron. During the second half of March 1919, the Battalion of Baltic Germans consisted of twenty-nine officers and 445 noncommissioned officers and men.
After Estonian independence was achieved, the Baltic-German troops were no longer necessary. Moreover, due to their activities in Latvia, the Baltic–Germans had worsened the situation of Baltic-Germans in Estonia and were already considered a threat to the newly founded Estonia. They were, however, far too weak to take over the government. Therefore, the Baltenregiment would not exist past general demobilization.
During the war of independence the regiment suffered sixty-eight fatalities (fifty-two were killed in combat, while sixteen died of natural causes) and about 120 wounded.
The Baltenregiment played quite an important role in the Estonian war of independence, but was too weak and could not play as significant a political role as the Baltische Landeswehr in neighboring Latvia. Therefore the Estonians did not need to disband it before general demobilization of their own forces.
Jarosław Centek, Nicolaus Copernicus University