On August 7th 1919 Ernest Hoy made the first flight from Vancouver to Calgary leaving from Minoru Park in Richmond at 4:14 am.   This may not sound like anything too exciting, but it is remarkable given the mountains of BC that had to be flown over.  This was a flight that in most ways was a much harder task than Lindbergh's solo over the Atlantic eight years later or the first transatlantic flight by Brown and Alcock in May 1919.  By all rights he should be better known in Canada at least than Charles Lindbergh.

He flew a Curtis JN-4 Jenny (or Canuck as ones built in Canada were called).  This plane had a speed of about 115 kmh and a maximum altitude of between 2000 and 2150 meters.  The Jenny was barely able to manage the altitude needed and landscape of BC is not forgiving for planes that need to land.

This is the first real crossing of a major mountain range by airplane in the world.  There was a short hop of 80 kilometers through Mullan Pass in Montana in 1911 but nothing on the scale of this flight.    There were also some over the mountains in the US Southwest before 1919 but the scope and scale of those mountains is not on the scale of the Cascades or the Rockies.   This was really a global aviation first.

Ernest Hoy was born in Dauphin Manitoba May 6th 1895.  He moved west to Vancouver before the war.  He enlisted on March 3rd 1915 shortly before his 20 birthday for active service overseas as part of the 102 Regiment.  The 102nd was sent to Britain June 18th 1916 and arrived in France on August 12th 1916.  He ended up as a private in the 3rd Pioneer Battalion of the Canadian Engineers.  It seems possible he would have been at the battle of Vimy Ridge.

He came down with trench fever in 1917 before May 9th.  While recovering in England joined the Royal Flying Corps.    He was assigned to the 29 Squadron in January 1918 but hospitalized in the spring only returning to active flying in August of 1918.

In only six weeks from the start of August he shot down 11 German airplanes and two balloons, that is more than two a week, a remarkable tally.  Few pilots managed so many kills so quickly.   He was shot down on September 28th 1918 and taken POW.  In December 1918 he was awarded the Distinguished Flying Cross.
Lieut. (A./Capt.) Ernest Charles Hoy. (FRANCE)
A bold and skilful airman who has accounted for four enemy machines and shot down a balloon in flames, displaying at all times a fine fighting spirit, disregarding adverse odds.
Supplement to the London Gazette, 3 December 1918 (31046/14322

It was less than year after his first aerial victory in Europe, he made his historic flight through the mountains of BC.    The reason he made the flight was because of a prize of offer for the first person to fly from Vancouver to Calgary in under 18 hours.   The prize was offered by three papers - the Vancouver Daily World, the Calgary Herald, and the Lethbridge Daily Herald.

With such a low maximum altitude, he could not fly a direct route from Vancouver to Calgary but had to follow the valleys and fly through mountain passes.  His route went via Vernon, Grand Forks, Cranbrook and Lethbridge.   The whole route was about 1,400 kilometers long, the direct air route is about 700 kilometers.  It is also worth remembering that none of the communities along the way had airfields.   He was relying on locals to choose a flat field that would suit his needs.

He made the trip in 16 hours and 42 minutes, an hour and 18 minutes faster than the limit for the prize.  He was actually in the air for 12 hours and 34 minutes meaning he averaged 112 kmh in the Jenny, pretty damn close to all out for the plane while in the air.  A train trip from Calgary to Vancouver at the time took 25 hours. 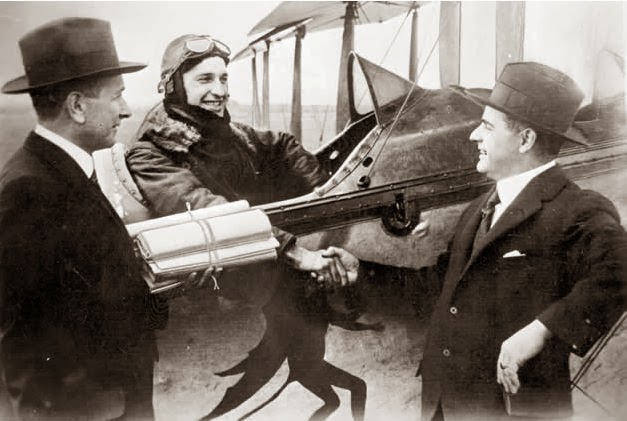 At the same time as Hoy was trying to win the prize, Ernie Hall was also trying to fly from Vancouver to Calgary.  Hall planned on taking his time and left days before Hoy.  Hoy caught up with him at Midway.  Hall chose to fly via Creston and landed there.   His plane was mobbed by the public and damaged which ended his trip.  I can not find out anything else about Ernie Hall.

He planed to fly back to Vancouver several days after getting Calgary.  This time be planed a more direct route via the route of the CPR and was only expecting to stop in Golden and then either Kamloops or Vernon before getting back to Vancouver.  He thought the return trip could be done in 10 hours total.  His flight to Golden I believe was the first flight through Kicking Horse Pass.

He left Calgary on the morning of August 11th 1919 but only made it as far as Golden.  In Golden two boys ran on the field he was taking off from and he had to bank causing the plane to damaged.   The plane could not be repaired there and had to be shipped by train back to Vancouver.

After August 1919 Ernest Hoy sold insurance for Sun Life Canada.  He eventually moved to Clarkesville Tennese where he raised Angus cattle, it is not clear when he did this.  By 1960 he is living in retirement on a farm in Georgia.

Some good links related to this story
Adventurous pilot flew into aviation history
Story from the Kamloops News relating to recognition of Hoy and the flight in Cranbrook in 2011
Ernest Hoy's RFC record
His Wikipedia page
Taming the Skies: A Celebration of Canadian Flight - mainly about the plane Hoy used
SE5/5a Aces of World War I